ARIMA, which stands for Autoregressive Integrated Moving-Average, is a time series model specification which combines typical Autoregressive (AR) and Moving Average (MA), while also allowing for unit roots. An ARIMA thus has three parameters: \(p\), which denotes the AR parameters, \(q\), which denotes the MA parameters, and \(d\), which represents the number of times an ARIMA model must be differenced in order to get an ARMA model. A univariate \(ARIMA(p, 1, q)\) model can be specified by

ARIMA(p,d,q) models in Julia can be estimated using the StateSpaceModels.jl package, which also allows for the estimation of a variety of time series models that have linear state-space representations.

Begin by importing and loading necessary packages into your work environment.

You can then download the GDPC1.csv dataset using the CSV.jl package, and store it as a DataFrame object.

The data can then be assigned a general ARIMA(p,d,q) representation.

Lastly, the above-specified model can be estimated using the fit! function, and the estimation results printed using the results function. The sole input for both of these functions is the model object that contains the chosen data series and its assigned ARIMA structure.

The stats package, which comes standard-loaded on an RStudio workspace, includes the function arima, which allows one to estimate an arima model, if they know \(p,d,\) and \(q\) already.

The output for arima() is a list. Use $coef to get only the AR and MA estimates. Use $model to get the entire estimated model. If you want to see the maximized log-likelihood value, \(sigma^{2}\), and AIC, simply run the function on the data:

In this case, we fail to reject the null hypothesis, meaning that there is at least one unit root in the data. To test for a second unit root, we can run an Augmented Dicky-Fuller test on the first difference of the time series.

The forecast package includes the ability to auto-select ARIMA models. This is of particular use when one would like to automate the selection of \(p,q\), and \(d\), without writing their own function. According to David Childers, forecast::auto.arima() takes the following steps: - Use the KPSS to test for unit roots, differencing the series unit stationary - Create likelihood functions at various orders of \(p,q\) - Use AIC to choose \(p,q\), then estimate via Maxmium Likelihood to select \(p,q\) 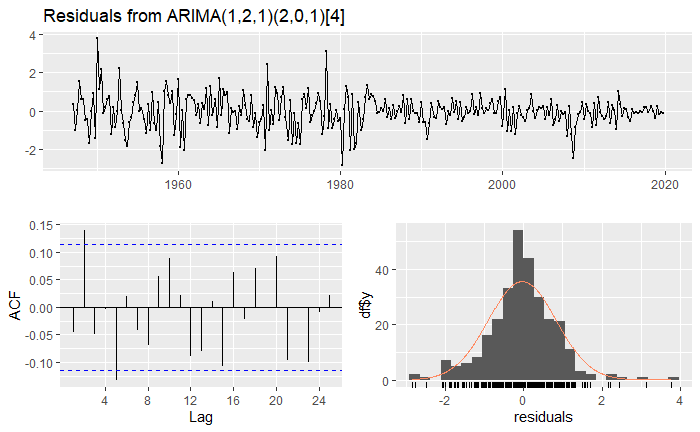 auto.arima() contains a lot of flexibility. If one knows the value of \(d\), it can be passed to the function. Maximum and starting values for \(p,q,\) and \(d\) can be specified in the seasonal- and non-seasonal cases. If one would like to restrict themselves to a non-seasonal model, or use a different test, these can also be done. Some of these features are demonstrated below. The method for testing unit roots can also be specified. See ?auto.arima or the package documentation for more.

The forecast package also contains the ability to simulate ARIMA data given an ARIMA model. Note that the input here should come from either forecast::auto.arima() or forecast::Arima(), rather than stats::arima().