Synthetic Control Method is a way of estimating the causal effect of an intervention in comparative case studies. It is typically used with a small number of large units (e.g. countries, states, counties) to estimate the effects of aggregate interventions. The idea is to construct a convex combination of similar untreated units (often referred to as the “donor pool”) to create a synthetic control that closely resembles the treatment subject and conduct counterfactual analysis with it.

We won’t have data for \(Y_{1t}^N\) but we can use synthetic controls to estimate it.

As a last bit of intuition, below is a graph depicting the upshot of the method. The synthetic control follows a very similar path to the treated unit pre-intervention. The difference between the two curves, post-intervention, gives us our estimated treatment effect. 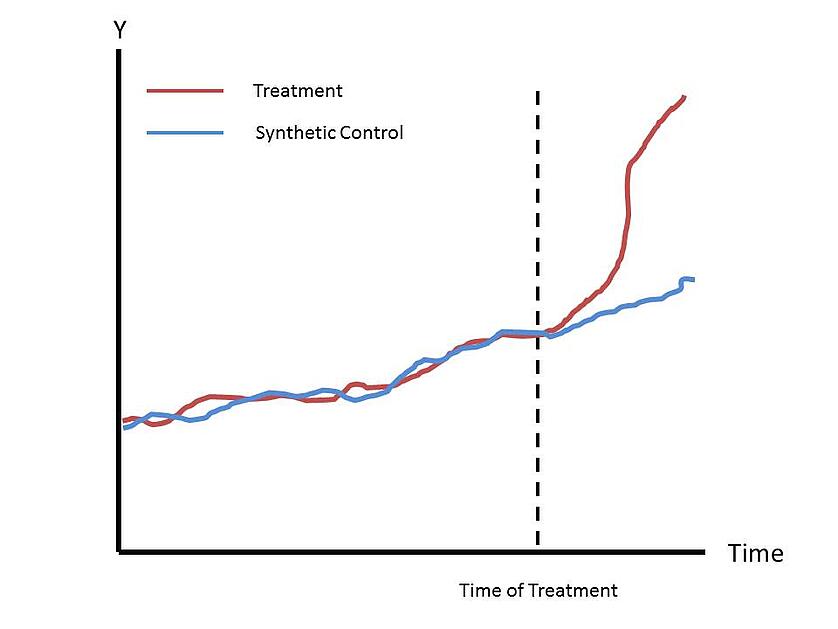 Here is an excellent resource by Alberto Abadie (the economist who developed the method) if you’re interested in getting a more comprehensive overview of synthetic controls.

Next we will run the synthetic control analysis using synth_runner, which adds some useful options for estimation.

Note that this example uses the pre-treatment outcome for just three years (1988, 1980, and 1975), but any combination of pre-treatment outcome years can be specified. The nested option specifies a more computationally intensive but comprehensive method for estimating the synthetic control. The trunit() option specifies the ID of the treated entity (in this case, the state of California has an ID of 3).

We can plot the effects in two ways: displaying both the treated and synthetic time series together and displaying the difference between the two over the time series. The first plot is equivalent to the plot produced by specifying the fig option for synth, except you can control aspects of the figure. For both plots you can control the plot appearence by specifying effect_options() or tc_options(), depending on which plot you would like to control.