Graph axes have the power to manipulate the story of the data, and that is why formatting graph axis is an important skill in big data. When plotting relationship among variables of interest, one of the useful ways to create visual impact and clarity is by way of formatting the x and y axis.

Different axis features that can be manipulated include:

Let’s walk through an example in R to learn how to manipulate intervals on graph axes. The dataset used in this article example will be the diamonds dataset since it comes with the package ggplot2: you can follow along with this brief tutorial at home. This data reports prices of over 50,000 round cut diamonds.

Let’s begin with a graph plotting price and clarity of a diamond, and seeing what it gives us as a default axis. We plot histogram in ggplot2 by using the ggplot() function with the diamonds dataset, and adding geom_density() to plot a histogram. Aesthetic mappings describe how variables in the data are mapped to visual properties(aesthetics) of geoms. 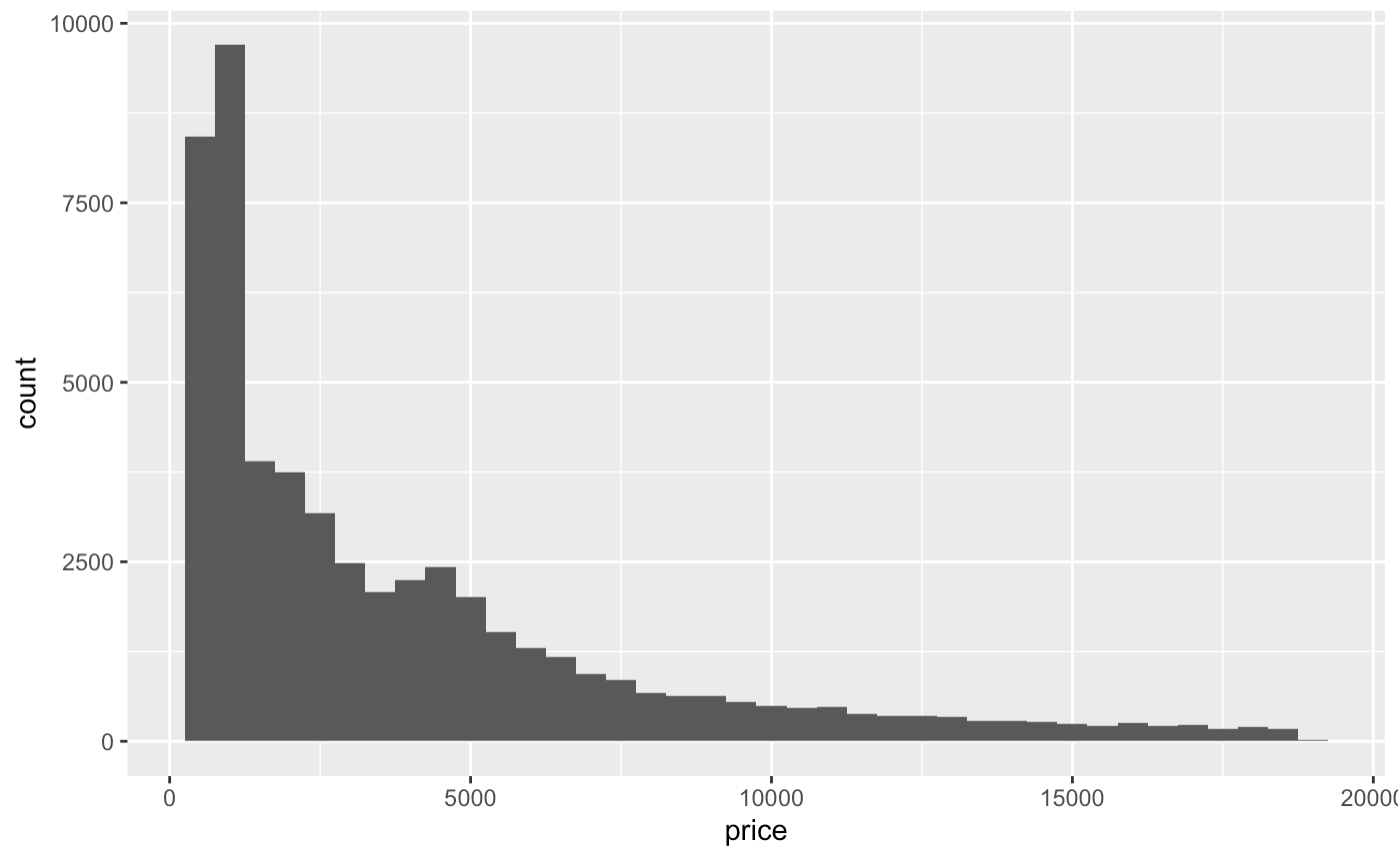 Axis titles can be changed using the labs() command. This works not only for the x and y axes, but also any other aesthetic that has a legend. (You can also set the title, subtitle, and caption in labs() - those aren’t axes but a lot of people don’t know you can use labs() for this! Who needs ggtitle?). We’ll switch to geom_density() here so we can add, and then label, a color aesthetic. 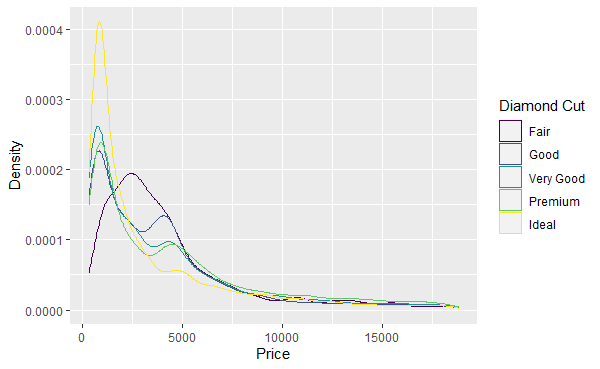 The scale and limits of the axes can be set using one of the scale_ functions. scale_x_log10(), for example, will use a logarithmic scale for the x-axis. There are a lot of different scale_ functions for different combinations of axis (including axes like color and shape, not just x and y) and scale type. You can use the limits argument inside of a scale_ function to determine the limits of the axis. The limits can be outside the range of the data, “zooming out” on the graph, or inside the range of the data, cutting some of the data out of the graph. Note that using limits inside scale_ will remove all data outside the limits. If you want to retain that data but just zoom the window in, instead look at the xlim and ylim arguments of coord_cartesian(). Note you can also use the position argument of scale_x_ and scale_y_ functions to move the axes themselves, perhaps putting the x-axis line at the "top" for example. 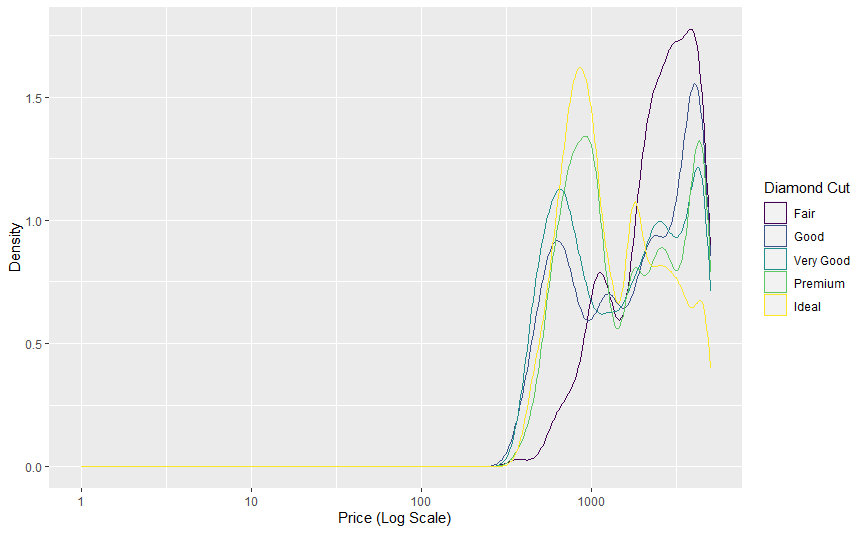 Note how (1) the x-axis is now on a logarithmic scale, (2) the density numbers are different - density has been recalculated after dropping data outside the range, we haven’t just “zoomed in”, and (3) the graph begins and ends at our specified limits.

The scale_ functions can also be used to label the values on the axes and specify how many tick marks there are. The breaks option lets you specify how many (or which) values get markers on the axis. The labels option lets you give it a function (or vector of values) that it uses to turn value labels in the data to printed labels on the graph. The scales package has a lot of good functions for use here in formatting numbers for print, like number(), dollar(), and percent(). These arguments canbe very useful in avoiding scientific notation, which ggplot2 tends to default to in a lot of cases. labels is also handy for labeling discrete values. In this example scale_color_discrete is being used to relabel the categories in the legend, but this would also work if the cut variable were on the x-axis with scale_x_discrete. 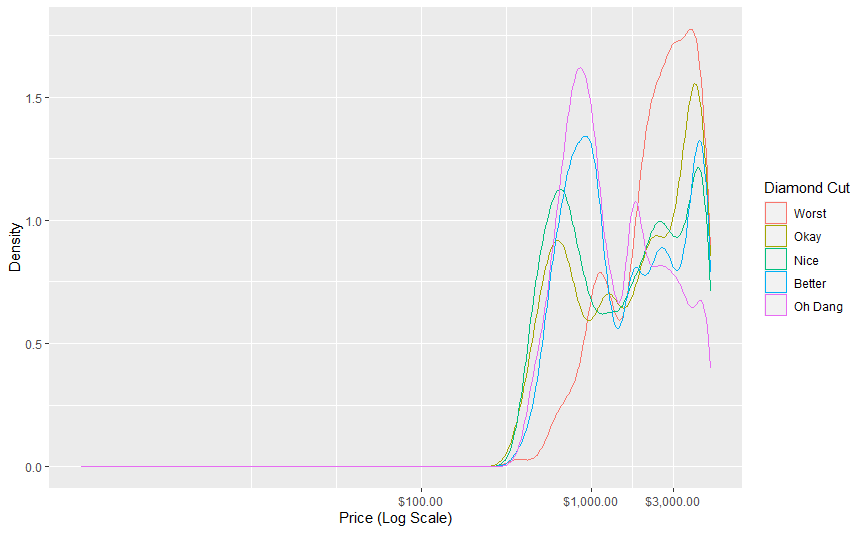 Finally, we can manipulate the look of the axes and ticks using the theme() function. The axis.ticks (or axis.ticks.x and axis.ticks.y to just change one of them) option takes an element_line() argument, in which you can set options like size, color, and so on. You can also change the axis.line (or axis.line.x and axis.line.y) options to change the look of the actual axis lines. There are also axis.text and axis.title options for changing how the text looks with element_text(). 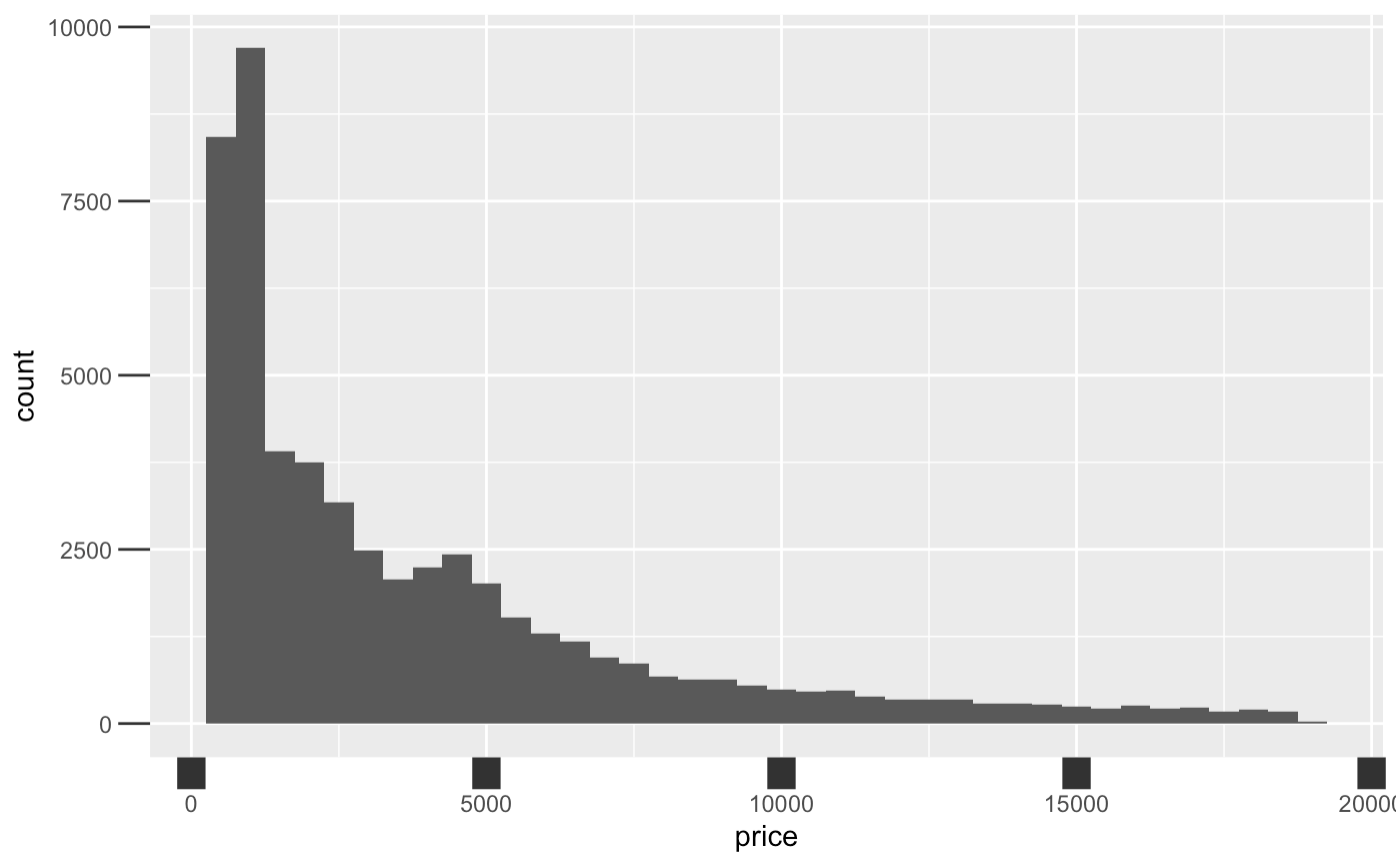