A Difference-in-Difference (DID) event study, or a Dynamic DID model, is a useful tool in evaluating treatment effects of the pre- and post- treatment periods in your respective study. However, since treatment can be staggered — where the treatment group are treated at different time periods — it might be challenging to create a clean event study. We will try to address these issues explicitly in the implementation examples that follow.

Important: The dataset used for the implementation examples on this page derives from a staggered treatment (“rollout”) design. Various studies have shone a light on the potential biases that can result from applying a standard, twoway fixed-effect (TWFE) regression estimator on such a staggered setup, including Sun and Abraham (2020), Callaway and Sant’Anna (2020), and Goodman-Bacon (2021). Where possible, we will highlight these issues and provide code examples that addresses the potential baises. Note that in cases where the rollout is not staggered (i.e. there is only one treatment period), the same approaches can be applied without loss.

The regression that DID event studies are based aroud is:

Important notes on the regression:

Mechanically, an event study is a graphical illustration of the point estimates and confidence intervals of the regression for each time period before and after the treatment period. It’s especially relevant in the DID environment as the point estimates are the average mean differences between the treated and control groups, which provides further evidence of the credibility in assuming parallel trends.

All implementations use the same data, which comes from Stevenson and Wolfers (2006) by way of Clarke & Schythe (2020), who use it as an example to demonstrate Goodman-Bacon effects. This data is a balanced panel from 1964 through 1996 of the United States no-fault divorce reforms and female suicide rates. You can directly download the data here.

Column _nfd in the data specifies the year in which the law went into effect for the respective state. We use this column to identify the lead and lags with respect to year of treatment. pcinc, asmrh, and cases are controls. Again, it is important to emphasise that treatment (i.e. when the law went into effect for each state) is staggered over time.

Note that there are some states in which _nfd is empty. These states never received treatment, and thus exist as a control.

Python makes dealing with lots of interaction terms like we have here a little painful, but we can iterate to do a lot of the work for us. 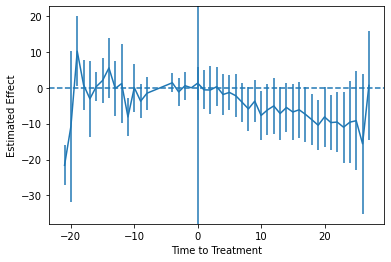 Of course, as earlier mentioned, this analysis is subject to the critique by Sun and Abraham (2020). You want to calculate effects separately by time-when-treated, and then aggregate to the time-to-treatment level properly, avoiding the way these estimates can “contaminate” each other in the regular model. You are on your own for this process in Python, though. Read the paper (and the back-end code from the R or Stata implementations listed below).

A variety of R packages can be used to conduct event-study DiD analysis. Here we will use fixest, which is both extremely fast and provides several convenience features (including ES graphics and implementation of the Sun-Abraham method). Note that we are using version 0.9.0 of fixest.

Let’s run our event study model. Again, we’ll be using fixest::feols() to do so. Note that the key time × treatment interaction takes place via the special i() operator. In the below case, we are essentially implementing a standard two-way fixed-effects (TWFE) procedure. We’ll also specify state+year fixed effects and explicitly cluster the standard errors at the state level (although this would be done by default).

While it’s relatively straightforward to convert this model object into a data frame and then plot manually using ggplot2, this is more work than we need to do here. Specifically, fixest provides a convenient iplot() function for plotting the interaction term coefficients from a model. The resulting plot can be heavily customized, but for event-study designs it generally does exactly what you’d want out of the box. 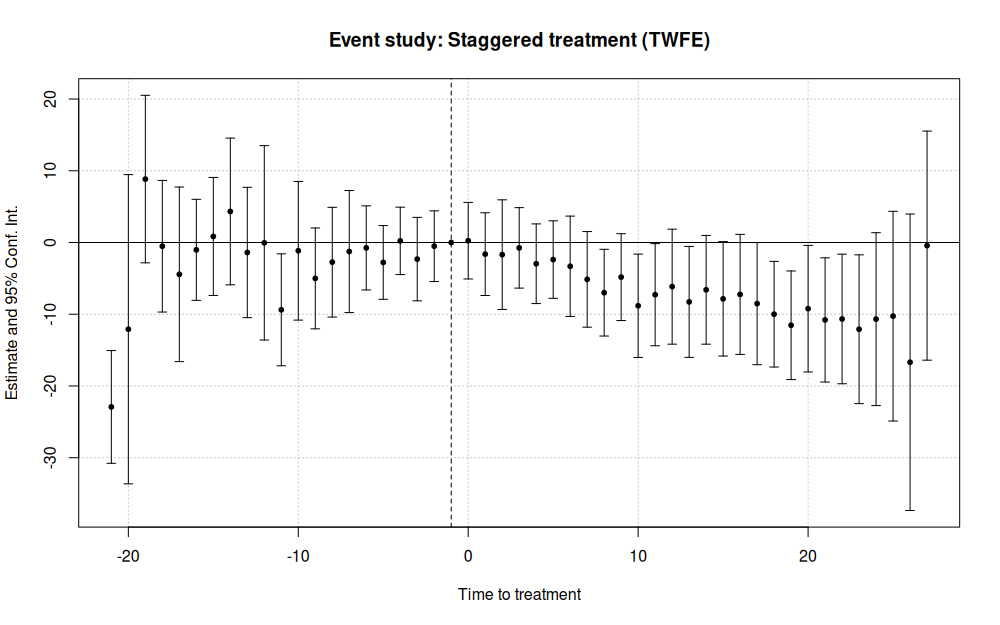 As earlier mentioned, the standard TWFE approach to event studies is subject to various problems in the presence of staggered treatment rollout. Fortunately, fixest provides the sunab() convenience function for estimating the aggregated “cohort” method proposed by Sun and Abraham (2020). In the below example, the only material change is to swap out the i() interaction with the sunab() equivalent.

Again, we can use iplot() to depict the resulting event study in graphical form. In this case, we’ll plot both the new Sun-Abraham mode results and the previous (naive) TWFE model results 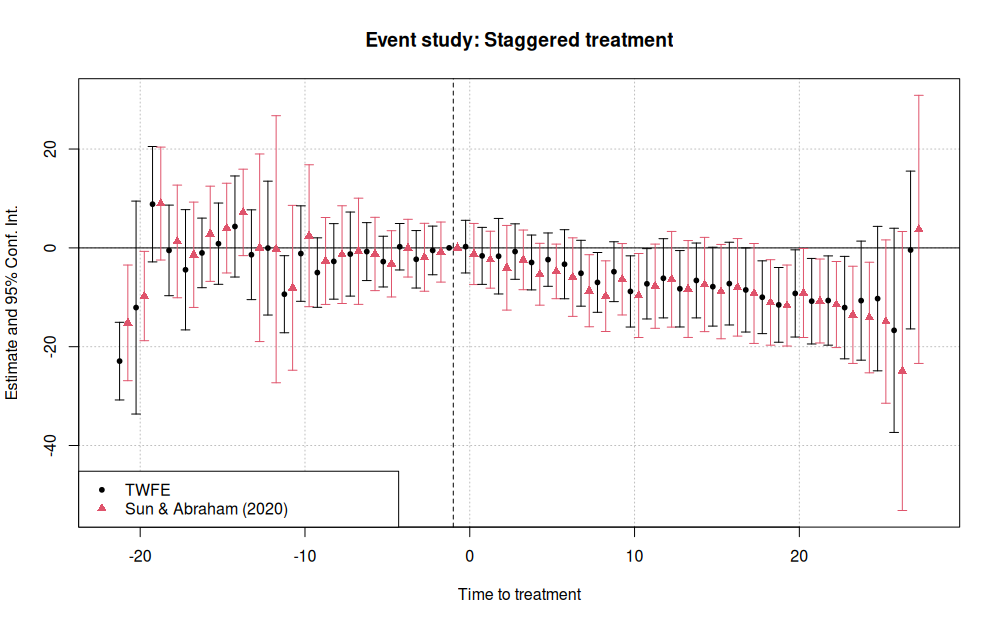 We can use the reghdfe package to help with our two-way fixed effects and high-dimensional data. Install with ssc install reghdfe first if you don’t have it.

Now we can plot. 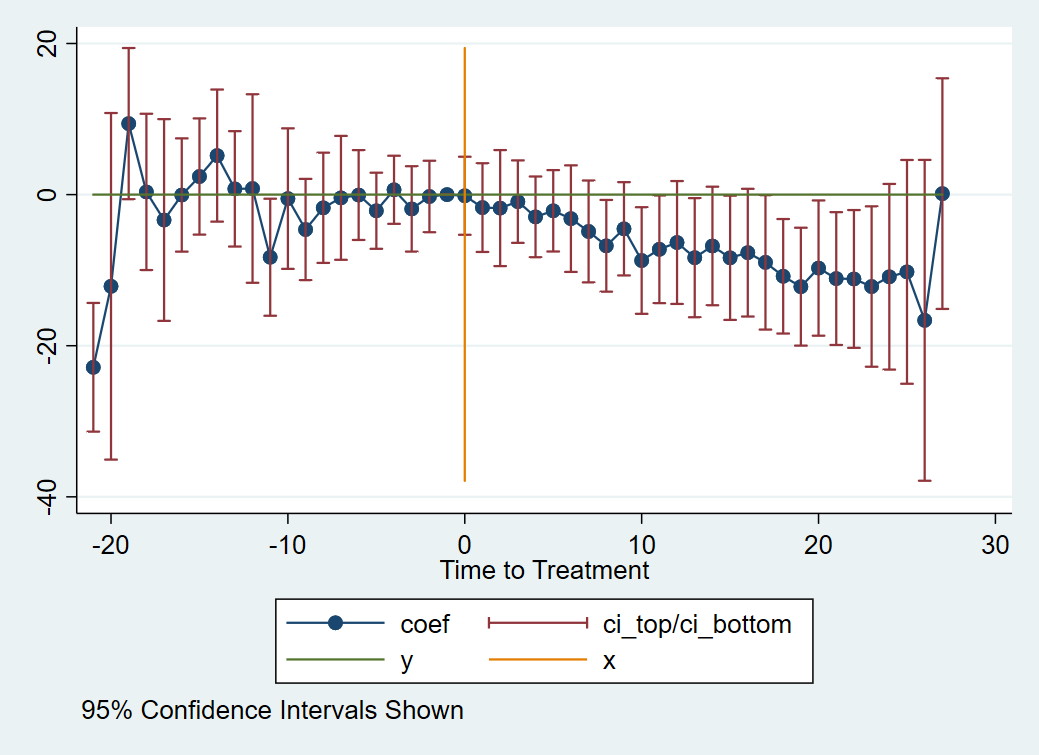 Any further decoration or theming at that point is up to you.